Catherine Sangster is Head of Pronunciation for Oxford Dictionaries. Before moving into lexicography, she spent nine years in the BBC Pronunciation Unit, and completed a DPhil in sociolinguistics. Catherine's research interests include language and gender/sexuality, feminism, accents and dialects, Latin, Germanic languages, and the phonology of conlangs. In part 2 (of 3), we discuss some of the technical details regarding pronunciation, dictionaries, and descriptivism v prescriptivism. You can find out more at Oxford Words, or keep up with Oxford Dictionaries on twitter @OxfordWords and @OED.

In case you missed it, you can find Part 1 here.

TD: I have some questions from the linguist, so I’ll do my best to pronounce all the words.

TD: When selecting voices for your audio pronunciations for the dictionary, is there dialectical variation, or when you have British English, is it always in RP?

CS: The short answer is ‘no’, and the long answer is coming.

CS: First of all, it depends what you mean by RP. The definition of RP that we work on is the one that was developed for an earlier Oxford publication by Professor Clive Upton, and his definition of RP is pretty broad. There’s a sort of conservative RP which is that quite 'the cet set on the met' sort of ‘Queen’s English’ except even the Queen doesn’t do it anymore, and then there’s a sort of broad RP. Clive Upton… a long time ago used to teach me, and he would say that I speak – the way I’m speaking to you now – he would call it RP. 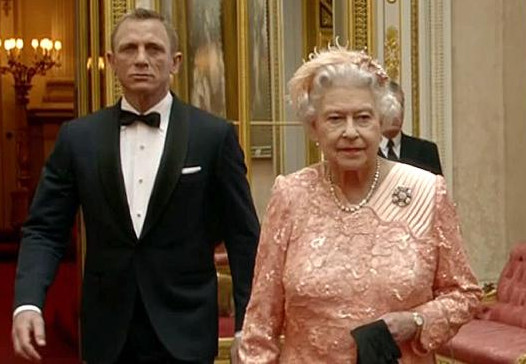 (Editor’s note: the parts in square brackets below are my editorializing, and the rhyming is in accordance with my Aussie accent. I encourage you all to imitate it out loud to get the full effect.)

CS: Now, there are aspects of my own accent which are not conservative RP: I say ‘glass’ with /a/ [rhyming with ‘ass’] not ‘glass’ /ɑː/ [rhyming with ‘arse’], I say ‘poor/pour’ with / ɔː/ [like an Aussie would say it] not /ʊə/ ‘poo-r’ – either for somebody who doesn’t have a lot of money, or for moving liquid from one thing to another. Another one is called yod coalescence which is when rather than saying tune [tyoon] and dune [dyoon] you say tune [choon] and dune [joon]. And so those are things that in a narrow definition of RP would be outside it, but in the broad definition of RP would be inside it.

Which brings me around to the answer. If you call RP broad, then yes, the pronunciations that we offer for British English reflect broad RP. However, in the OED for instance, all the bath/glass/grass [all pronounced to rhyme with ass] words, have both pronunciations bath and bath [bath and barth/bahth] given, and we similarly include that yod coalescence, which is quite widespread now. So it’s a sort of broad and modern RP for British English. We don’t reflect… this is a bit difficult to explain without reference to some technical stuff, so I’ll tell you a bit and you can use it or not.

TD: Deal, that sounds reasonable. (Editor's note: We decided to leave it in. Obviously.)

CS: When you make a phonemic transcription of something, the symbol you choose can encompass more than one possibility. For instance if I’m doing a transcription in IPA for the word ‘bus’, then the symbol I use for the vowel in the symbol of that word is like an upside down v (ʌ). Now, there is another symbol which you could use if you wanted to use a kind of Yorkshire ‘boos’ type vowel, but you can argue that if you’re doing broad phonemic transcription like that, that the use of a symbol can include a range of different phonetic possibilities for something. Similarly, a speaker whose accent is influenced by Irish English would probably have more of a dental ‘t’, and someone from the south of England would probably have more of a ‘t’ that’s alveolar, further back in the mouth (well still at the front, but not as far forward as your teeth). But in a broad phonemic transcription, you would still use the symbol ‘t’. In a close phonetic transcription you have diacritics – extra symbols that say very specifically ‘the closure for this is here, and the kind of release is like this’ – but that’s not the kind of transcription you use in a dictionary. That belongs in, for example, a transcription for the purpose of speech therapy, or for a very close analysis of a regional accent. In my past I’d have done that kind of transcription, but for dictionaries it’s broad. 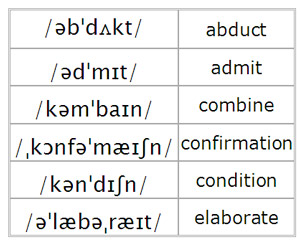 But your question was about the voices we choose to read those transcriptions aloud, and then you’re picking a person, so all of that useful abstraction that you get with a phonemic transcription is lost. In picking people, other things are more important than accent. We need people with a clear voice, good microphone manner; I know that sounds odd, but some people get in the booth behind a microphone and they speak in a very robotic way, or some people get mic fright and if they can’t get over it then it’s not the job for them! It’s not even a problem particularly if people have a stutter… the way we record, they’ll go into a booth with a list, and they’ll go through. They have to be very careful not to use a very list-like intonation, because we don’t want the words to be [makes up and down noises, much like Australians are famous for].

CS: Because once you chop them up, that sounds very strange. They have to… it’s a fairly artificial way of speaking. We try to get a bit of apparent gender balance as well: I don’t want the voice of the dictionary to be male necessarily. And there is difference in things, some of which are corollaries of apparent gender, like pitch. I probably wouldn’t use somebody who had a very obvious, very localised non-RP regional accent for the British English recordings, because we’re trying to give something that’s fairly general and in line with at least a fairly broad RP.

Before I had the job I did, I myself was at one point several years ago one of the many freelancers who did some recording for the dictionary. So if you go to oxforddictionaries.com and you listen to the pronunciations, a very small proportion of them are me! [Laughs]

TD: That’s very cool! So you’re permeating all levels of the dictionary!

CS: Yeah! And when we did the regional ones, most of the regional stuff was spoken by members of the dictionary team, because we have members from lots of different countries. Not all of them; I did have to find some external freelancers to come in for varieties of English that we didn’t have covered, but it’s quite nice, you know, being the voice of the OED is pretty cool.

TD: Yeah, I’d be writing that one on my forehead, or at least on my CV.

TD: Or you know, it would be a nice one in the Twitter bio, ‘voice of the OED’

TD: So apart from the fact that the voices you’ve chosen are more limited in their range, you’ve talked about the fact that there are lots of possibilities for pronunciation in terms of how they’re phonetically written, and I took it from your Nine Worlds talk as well that the point of Oxford Dictionaries is to reflect usage rather than prescribe it. What are your thoughts on institutions such as – and please excuse my bastardising of the French language [TD prepares herself to pronounce French with an Aussie accent] – the Academie Francaise, which attempt to control the evolution of language?

CS: I’m glad to be working in the English language where that isn’t seen as the way to go. English’s role in the world is rather different – English’s position as a global language is special – and there’s so much diversity in English, within the British Isles and around the world. I’m glad that there’s a general recognition that description rather than prescription is the way to go, and that’s certainly something that underpins what we (and not just in the pronunciation but in definition and in all aspects of a dictionary entry), my colleagues and I would be guided by. ‘How is this word actually used? ‘What do people mean by it when they say it?’ Which is not to say ‘throw away the etymology! Throw away the historical!’; the OED especially is a historical dictionary, so as a word’s meaning evolves, all of those definitions would be recorded in order in the entry.

Think about the pedant’s favourites, a word like ‘decimate’, where people will say ‘no, you have to mean you’ll kill one in ten!’ Yes it can mean that, and it can mean other things as well, and so recording both of those is really important, and is part of the job of what dictionary writing is. Lexicography is very different from language control. Organisations like the Academie Franscaise seem to operate in a different sphere, their role seems to be to rule and to prescribe, and not necessarily to embrace language change in all its forms, as it happens. 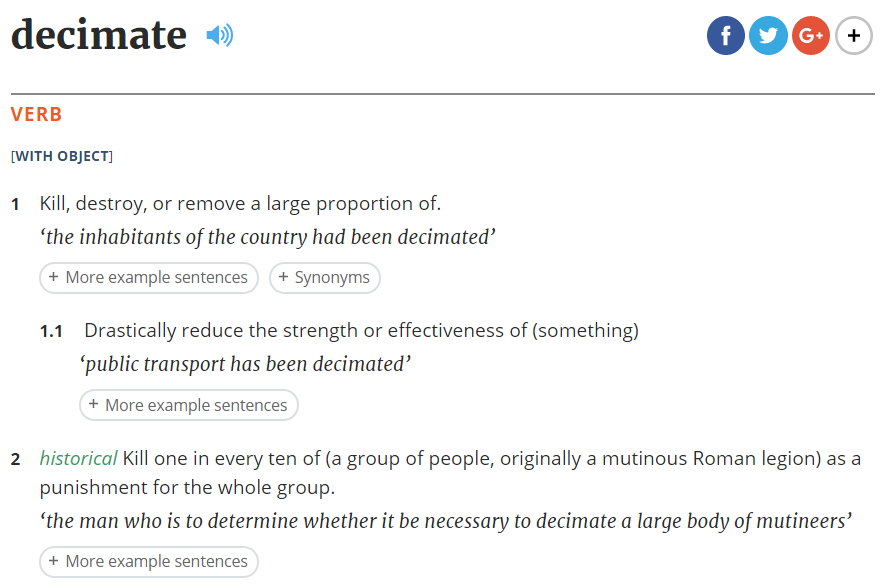 CS: One thing I should’ve said earlier, actually, is that we do of course give more than one pronunciation for things, and that’s a good example of actually when something changes. You might have a loan word for instance for a piece of food or something, that comes in from another language and when it comes in there’s a very foreign-like pronunciation that some people use, and then a very spelling-like pronunciation, so something like ‘chorizo’ or ‘bruschetta’: all these ones that people feel they get tripped up by. In that kind of situation we would probably record both: we’d have the pronunciation that would possibly be used by the foodie expert for whom authenticity is really important…

…possibly with knowledge of the original language, and then a generally acceptable spelling-based pronunciation that maybe becomes the majority usage. Now there’d be arguments for dropping either one of those: people might say ‘oh you know, nobody actually says this anymore, so we shouldn’t even give it’, or ‘this is truly correct, and so we shouldn’t drop it just because 7/10 people say ‘chorizo’’. It’s nice that we can accommodate them both, which is quite different from the prescriptive vision. 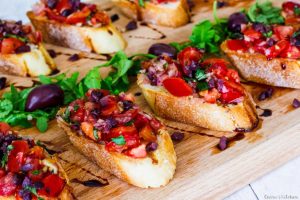 And so ends Part 2. Our discussion concludes in Part 3.