We’re back! We survived! For those of you not in the know, those exclamations are in relation to Nine Worlds Geek Fest, which took place last weekend, and was fabulous.

The Doctor was joined by The Master, Alice Bell, Daniel Nye Griffiths and Hazel Monforton to discuss the deeper side of Dragon Age, including its treatment of sexuality, gender, class, religion and ethics. The populous audience made a series of astute observations and asked fascinating questions, and a merry time was had.

This whole panel is so good I might cry #DragonPhil

Taking a little time out before next session. Thanks to all involved in #dragonphil was a really engaging panel. #NineWorlds

If you missed it, or want more, never fear: there will be Dragon Age-related posts on the site soon, including interviews with Hazel and Daniel.

In this panel, BAFTA-award winning TV writer Debbie Moon, Filmmaker Sarah Barker, comics expert and academic Jude Roberts, and writer and critic Roz Kaveney joined the Doctor to critically engage with feminist themes in Netflix's Jessica Jones. Questions considered included: what makes a strong female character, and muscles aside, does Jessica fit the bill? Is she a hero? How does the show handle intersectionality, and what could it do better? How does the TV show compare to the comics?

The Doctor got to wax lyrical about her favourite subject - time travel - and to her surprise and delight it was one of the most popular events at Nine Worlds! The focus: what a philosopher thinks makes good time travel fiction, a field guide of sorts for creators and consumers alike. Find out more in the Epicurean Cure's ongoing time travel series.

Just walked out of the best panel at #NineWorlds (so far). Time travel in fiction by @EpicureanCure. Fascinating! pic.twitter.com/OPvi9X66UC

Lessons for Academia from (Video) Games

Our resident philosopher was joined by evolutionary linguist Sean Roberts (soon to be from Bristol, but currently the Netherlands) and Game Studies ‘Person’ Matt Barr (University of Glasgow). Each gave a short talk on their research and the potential of video games to shape, inform and improve academic practice. Academics often theorise about video games, but this was a chance for video games to talk back.

The trio spoke about what we can learn about so-called ‘folk intuitions’ from the tropes in games, how video games impact learning, and what Minecraft and chimpanzees (not together, sadly, no chimps played Minecraft) can tell us about the evolution of language and cognition. You can read about the latter here. If you’re interested in more events like this, consider checking out the new Relating Philosphy & Games (RPG) series, which you can find out more about on facebook and twitter.

If you missed any of the above, or would like further info, let us know. And if you’d like to host similar events, or are running something we could usefully be a part of, do give us a shout.

The Epicurean Cure team also had the pleasure of attending other people’s sessions, including the splendid Catherine Sangster – head of pronunciation at the Oxford English Dictionary – talking about words from geek culture that are making their way into the dictionary; Classicist Nick Lowe’s fabulous insights into historical fiction and fan culture; and a fascinating panel on gaming and neurodiversity, including some superb development tips:

One last thing on the Nine Worlds front: we’ll be announcing the winner of our microfiction contest on Monday 21st August, so stay tuned for that! 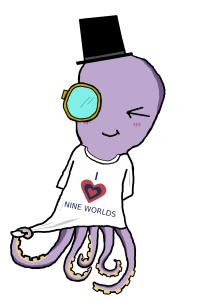 Finally, what to expect in the coming weeks: interviews from some excellent folks (both academics and fiction creators, sometimes both at once!), new instalments in our existing time travel and foreknowledge series, and more reviews. If there’s anything in particular you’re hoping to see, do comment below. And, as always, if you’re interested in getting involved, there are plenty of ways to participate.