Ori and the Blind Forest

I felt a sense of pain when I beheld

The silent trees, and saw the intruding sky.

Then, dearest Maiden, move along these shades

In gentleness of heart; with gentle hand

Touch – for there is a spirit in the woods.

With not a little reservation, I’ll admit: previously, I’ve never liked platform games. The rigid, linear trajectory always struck me as tyrannical; an autocratic device that purposefully dispensed with meaningful story and character development in favour of a tightly-controlled ‘bonus’ economy, the player conditioned from the game’s inception to be satisfied, even sedated, by the promise of scores-without-ceilings, base power-ups dosing ephemeral advantages, and a trope-drenched plot dotted with Manichean characters, each of whom are about as charismatic as a recycled tampon. Further, and I regard this as a foundational gaming principle to which I fervently subscribe, if there’s no opportunity to creep on a broody elf or dashing mage, I’m really not interested. 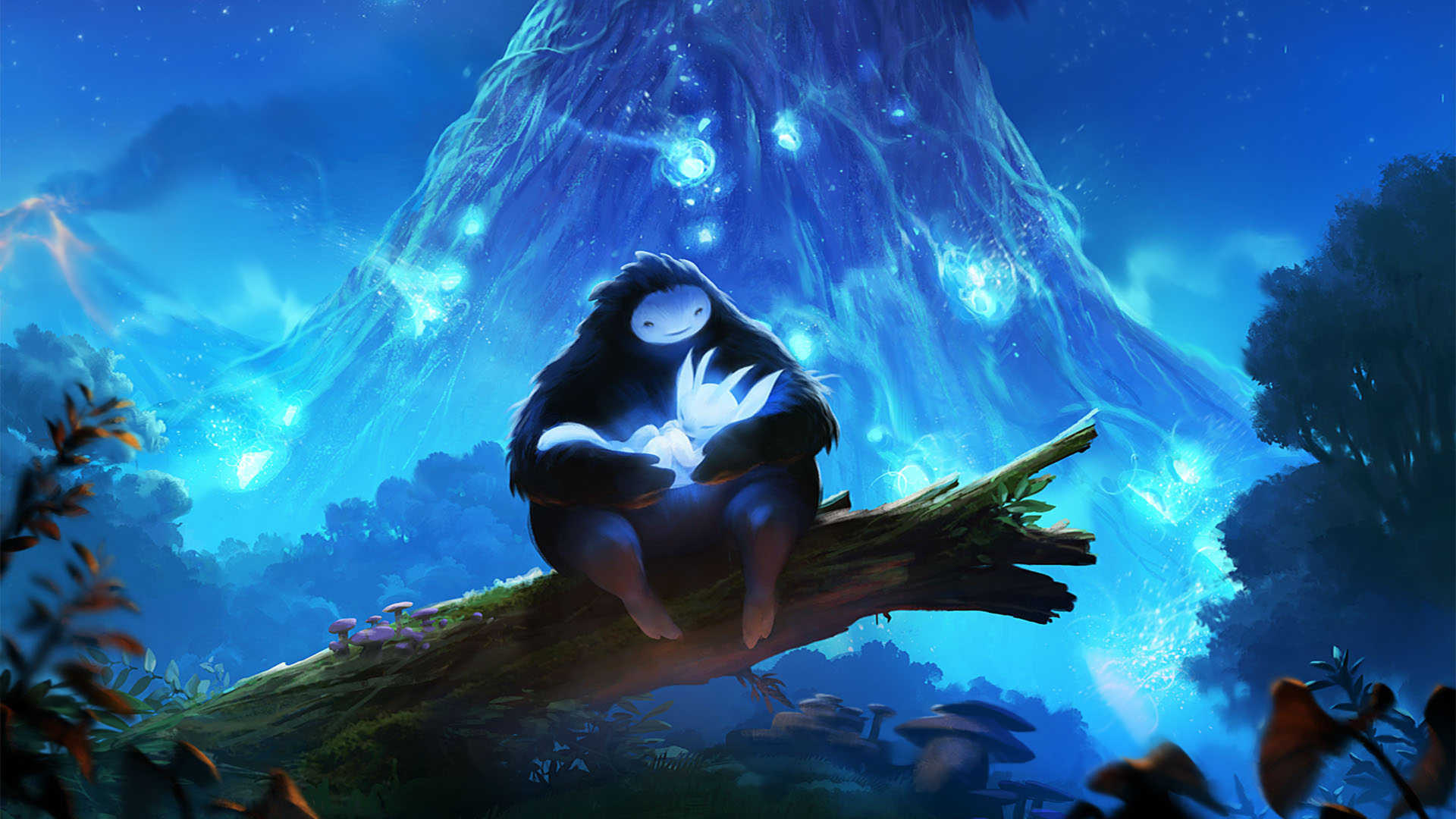 So when I chanced upon an image of Ori and the Blind Forest, I’m not really sure why I decided to buy it. Likely it’s the result of my prizing aesthetic quality above all else (life is infinitely more negotiable, if a little less rich, when you estimate the merits of a prospective friendship based not on personal compatibility but on how long you’ll be able to tolerate their looking like an animated bin-bag). The bioluminescent landscape, the character design, the obvious depth of Naru and Ori’s connection: it’s disarming, and immediately brought to life by the exquisitely haunting opening soundtrack, all of which inspired the thought, quite unbidden: “This game is going to be baws-to-the-wall awesome.”

The story itself recalls the abiding trope of the endangered forest, destabilised and unbalanced, its peril engineered by an external, often apathetic force. Throughout the game, I was reminded of Princess Mononoke, and in particular the kinship in motive between Kuro, the bereft antagonist, and Lady Eboshi. Both fight against a forest indifferent or opposed to their wellbeing, and both intend to retaliate with fatal finality, regardless of consequence. This is what stayed with me – long after the credits were done and I’d moved on to my nth replay of Inquisition, I couldn’t forget the injustice. Through no fault of her own, Kuro’s chicks are killed by a reckless ceremony of the Spirit Tree, the heart of the forest of Nibel. In an effort to protect her last egg suffering a similar fate to its brothers and sisters, Kuro strikes at the Spirit Tree and triggers a cataclysmic series of events that threatens to devastate the landscape, an act whose motive is cruelly dismissed by the narrator as the result of “her misguided will.” And the injustice is poetic: the fateful ceremony conducted by the Spirit Tree was itself a desperate attempt to find its lost charge, Ori.

The experience of playing Ori and the Blind Forest is restful, and nourishing, and revitalising – it’s a game that provides the player with a supreme sensory satisfaction. But it’s also frustrating, and heart-breaking: Kuro ultimately sacrifices herself, not for the forest, but to protect her last egg from being destroyed by the destabilised landscape. She has no way of knowing that, after her death, her last egg would be found and nurtured by Naru, Ori’s adoptive mother. There’s no apology, no justice and barely any acknowledgement for what was inflicted on her and her unborn young.

But it’s this poetic injustice where so much of the game’s narrative and emotional impact draws strength. The theme of parental love and altruism is prevalent throughout – we see it in the motives of Naru, Kuro and the Spirit Tree – and the absence of a universal happy ending, a reward for each character’s efforts, is what gives this game the emotional maturity that makes its story so compelling.

“…it’s this poetic injustice where so much of the game’s narrative and emotional impact draws strength.”

Despite the absence of any humankind in the game, there is a distinct anthropocentric imperative present, each character compelled by distinctly human sensations and scenarios: Kuro’s bereavement and righteous rage, her and Naru’s selfless capacity for sacrifice, their desperation to protect what they love; Ori’s heartbreak and resolve; and Gumon’s dispossession and loneliness. This kind of anthropomorphism has often been dismissed by critics as “sentimental appropriation of the non-human for human ends,” and guilty of what John Ruskin called the “pathetic fallacy” – an emotional falseness. Examples can be found throughout art, historical and contemporary, popular and obscure: from Dream of the Rood, a 10th Century Anglo-Saxon poem told from the perspective of the cross on which Christ was crucified, to “Angels of rain and lightning” in Percy Shelley’sOde to the West Wind(1820); from Aesop’s brash hare and slow but steady tortoise (and refereeing fox) to Tolkien’s Ents. A primary issue that ecocritics have with anthropomorphism is that conceiving the non-human world as human-centric compels us to understand nature, the landscape, in human terms and thus inevitably exploit it for human benefit. Tempting thought it may be to dismiss such a construction as the ramblings of a dehydrated hippie, there is a substantial subscription to this argument (see Further Reading) and so, I suppose, we ought to consider it. Certainly, constraining one’s world view to any universal principle is, universally, a bad idea but scholars such as Andrew Bennett and Nicholas Royle (who offer an admirable explanation of ecocriticism in their book Literature, Criticism and Theory) fail to show why anthropomorphism is a bad thing – ecocritics in general have established themselves as talented archivists of anthropomorphic instances in literature but offer little empirical data on how this translates into pitch-fork-wielding villagers lynching daffodils.

The ‘anthropomorphism = bad’ contention is administered by its proponents largely against literary instances and so, crucially, this ignores the sizeable swathes of media, such as video games and animation, which deploy anthropomorphism either in defence of the landscape (think virtually every Miyazaki film) or as a performative device with which to deepen our relationship to the narrative – and, consequently, the landscape in, under and on which it takes place. Imbuing something with human qualities intensifies, rather than negates or qualifies, our affections: the friendly dog who adores touch, the recalcitrant kitty who resents affection (and this only makes us love him more), the parrot with a sense of humour, roses that shiver with delight when watered. Language, most glorious of human constructs, invites anthropomorphism, and understanding something in human terms is an inevitable, but by no means necessarily disastrous, consequence. Ori and the Blind Forest captures the performative quality of anthropomorphism perfectly: my heart broke for Kuro the owl, and sharing Gumon’s sorrow as you understand he is the last of his kind is inexorable. Even if a White Rhino doesn’t understand its state as the last of its kind, we – humans – do and it compels us to care and defend and nurture.

Ori and the Blind Forest celebrates that human capacity to relate to the non-human: with only minimal subtitles to edify the strange, sonorous language of the Forest Spirit, the game and its narrative flawlessly communicates its message through the character’s meaningful relationships and the trials they face – and, sometimes, don’t overcome. By no means didactically, it’s a game that proposes the value of self-awareness but respect for blinding grief. It is singularly, to date, the most beautiful video gaming experience of my life, and wholly responsible for my nascent love affair with platform games.

If you’re interested in a rough introduction to ecocriticism (and, indeed, literary criticism in general) that’s an easy read, I’d recommend An Introduction to Literature, Criticism and Theory by Andrew Bennett & Nicholas Royle.